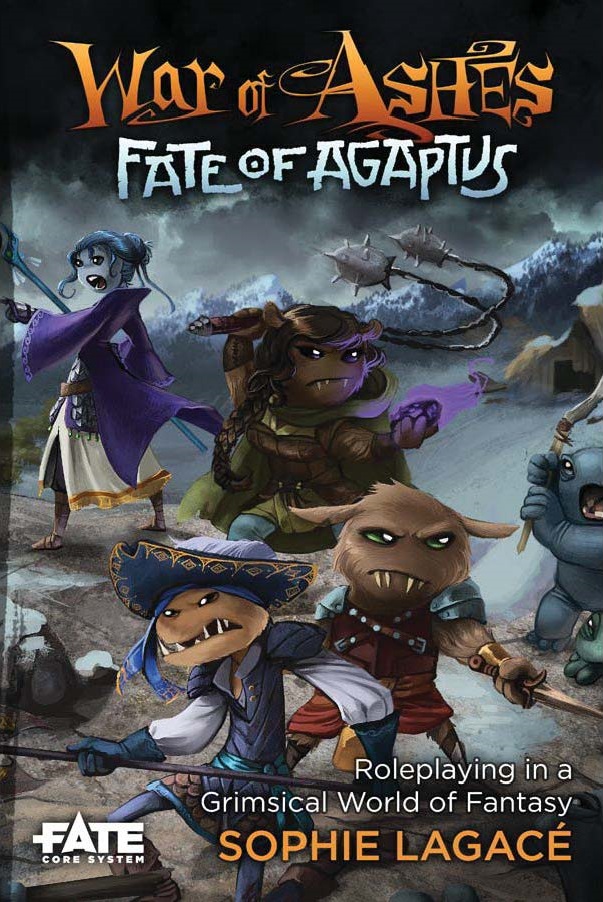 It's taken me way too long to write up a review of War of Ashes: Fate of Agaptus. I've wanted to write the perfect review, detailing just how much I love this game. I wanted to show just how much thought and world-building this book has in it, and how the different factions / characters in this book blend together to make an interesting, "lived-in" world.

I may still write that review at some point: poring over each and every page, detailing what I found interesting.

Not that I feel the authors did a disservice to the material that only I can fix; I mean that I wish that games that I wrote even approached how wonderful this book is.

The source material for this book is the miniatures game "War of Ashes" by Zombiesmith games. Generally speaking miniatures games don't put a whole lot of depth into their characters. Sure they may have some backstories and motivations, but the objects of those games is to annihilate the opposing forces.

What "War of Ashes: Fate of Agaptus" does that is so brilliant is it takes what is ostensibly a hack-and-slash game and transforms it into a living world. And the world they present is a fascinating world.

Each "race" believes different things about their pantheon of gods. The Elvorix believe in many gods, the Vidaar believe in one god, and the Jaarl ignore their gods. (The Kuld believe in a diffuse, impersonal universal force). While on the surface that feels a bit trite, the interactions between the gods and the races is what really shines in this book. There are certain gods for which the Elvorix do not want to draw attetion. Agaptus, the God of Sky and Stars, is a bit heavy-handed whenever he arrives, so the priests do things like burn smelly incensei, and make the temples and themselves unattractive to keep the god away. The Vidaar have one god: Akka -Maas, which the Elvorix claim is another name for Agaptus and which the Vidaar vehemently deny. It's writing like this that breathes life into the world and makes for interesting interactions between characters.

Apart from religion each society has their own ways of thinking and behaving. While they share some similarities there is enough differences between them to make for interesting interactions for characters. The world feels lived in, with reasons for each of the factions to live, work, and behave the way they do. And all throughout the book there are seeds and ideas that give direction for what sorts of adventures the characters could have.

The book is written in the perspective of an in-world historian, along with conversations between her and other in-world participants, gives a unique flavor to each of the races and how they interact and interpret the events in the world.

I won't go too in depth about the system itself. Suffice to say it's a stand-alone version of Fate Accelerated that I am looking at carefully for my own designs. :)

And the artwork. I really love the artwork and the style of this book.

In short I think "War of Ashes: Fate of Agaptus" is an excellent book, and I hold it as a standard for what I want to achieve with my own writing and design. It builds a world, shows how to best participate in it, and creates interesting obstacles for the characters to interact. I would see small skirmishes in this world, and epic campaigns. It has depth and mythology that make sense, and draws out a sense of humor that fits the characters and setting.