This is a continuation of my Magical Moments in computing series. I promised this a few posts back, but life has a way of getting in the way. Anywho, on with the show.

I knew that folks created computer programs but in the early days of computing they treated their programmers like Motown Musicians. Folks like The Funk Brothers didn't get billing on any records they performed on because there was a concern that they might get poached by other record labels. Programmers were treated the same way. It wasn't until companies like Activision were created where programmers started being treated like rock stars. In one of the issues of Popular Computing was an article about Chris Crawford entitled "Atari's Secret Weapon". 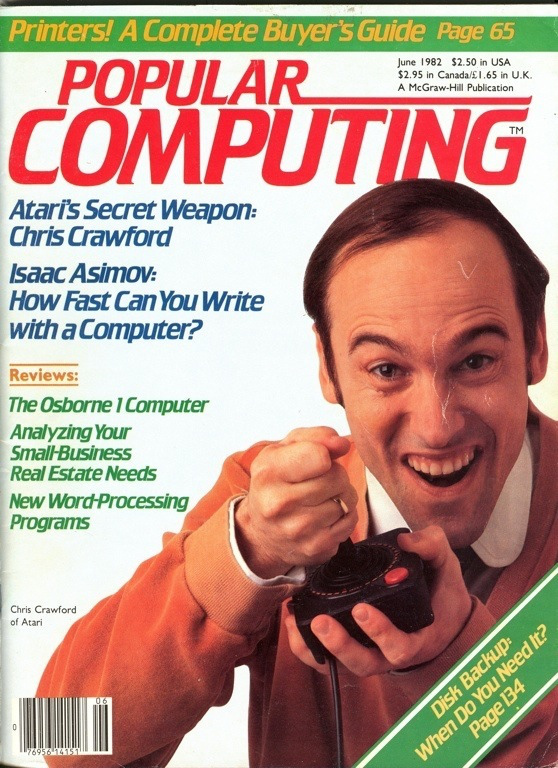 I've talked about this before on this blog; about how I dressed up as Chris Crawford for Halloween in the fifth grade and what an inspiration he as been for me over the years. He even has a tag on this blog for goodness sake. He's like JoDee's love of Carl Sagan. If it weren't for these folks in our lives we'd be entirely different people.

It was around this time that our school got three Commodore PET 4032 machines along with disk drives. I spent a lot of time playing with those machines. If anyone wanted to know where to find me it wasn't hard to locate where I was. I did some programming on these machines with BASIC and what not. Mr. Kischnick was tasked with teaching us computer programming and he did his level best. I was a sponge though, always wanting to learn more about the computers.

Unfortunately I was naive enough to think that I didn't need to learn things like Assembly Language. I blame the magazines of the era for saying that we didn't need lower level languages. I've realized my mistake and done what I could to rectify this. What's neat about retro-computing nowadays is that I have access to a bunch of material that would have been expensive to obtain when I was a kid. I would have spent most of my waking life mowing lawns rather than programming.

Speaking of books there were books made for kids called Micro Adventures. They were fiction books that had programs in them that had little games, puzzles, or clues in them. They were rather clever and did their best to try to make lots of versions for different machines. They were rather interesting books and occupied a lot of my time.

A lot of things happened during this period. My parents got me subscriptions to many different magazines: Atari Connection, Popular Computing, K-Power, and an occasional Compute! and Byte magazine. But this was before things really heated as I got older and learned more about the machines.

(As an aside there's a later version of one of the books that I dog-eared the crap out of called Computers for Everybody. It's interesting to see how many machines fell by the wayside. Gone are the images of the APF Imagination machines, the Exidy Sorcerer, and the TI 99/4. I should donate the first edition of the book to the archive so they can have a copy. It's such an important part of my life and I hope others can find similar enjoyment with it.