I recently picked up a latex sword from a rather large online retailer. It showed up yesterday before Halloween. It wasn't part of any costume though (well, not in the traditional sense). 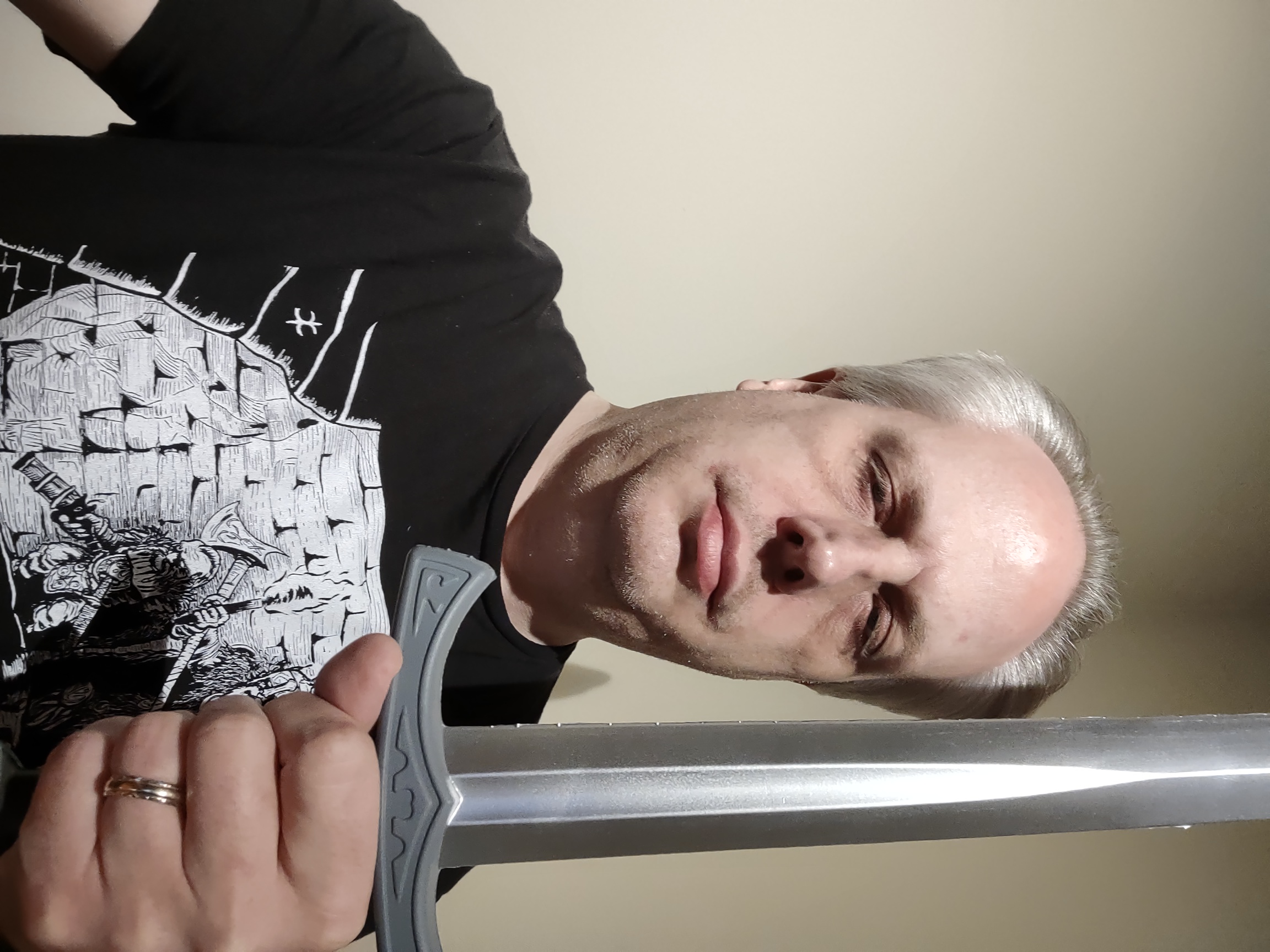 I previously had a cheap plastic sword that I've had since college. Unfortunately this year it broke. I was a little bummed that it had broken, but I didn't pick up a new sword to replace it.

I picked it up because of metaphor.

The first is because of Chris Crawford. I posted this in my entry for the "Not Going to GDC" Jam entry honoring him:

At the end of the Dragon Speech Chris honored Don Quixote. Don Quixote was considered by many of the folks of his day to be a fool; a man who clearly had lost sight of reality. But Chris pointed out that Don Quixote had imposed his own reality upon the conventional reality. His reality saw sheep as armies, and the windmill as a dragon. And Chris realized his mission was to slay the dragon that others refused to see; to create story worlds where the player could shape the world through myriad actions. He realized that games lacked real interactivity and his vision was of more complex and advanced interactive storytelling games. These weren't simply puzzles where the designer showed how clever they were by frustrating the player; these were grand stories where the characters drove the story in ways the designer might not anticipate. ...

At the end of his speech he picked up his sword and pledged himself to fight the dragon "For truth! For beauty! For art! Charge!". Upon uttering these words he galloped out of his talk, sword extended, and left CGDC (and the games industry) behind.

I've long held that metaphor in my heart. The role of any designer is to tilt at the windmills that others find foolish and ridiculous. Chris left behind his entire career as a games designer in the hopes of creating something greater. I have a great admiration for him and I consider him a mentor.

This year was also pretty challenging for me. It's the year that I discovered I had cancer. I've had a lot of life changes this past year. Many times I've had deep conversations about what I truly want out of life. And every time I keep coming back to creating games and interactive stories. It keeps calling to me.

I've wanted to do this for quite some time, but I have always come up with excuses. There's way more talented designers than me. There's no way to make a living off of this. Your skills aren't good enough. The only creative exercise I was doing was crafting up excuses. Too tired, too busy, too whatever-and-ever.

Living in the world of metaphor one could say that breaking my old plastic sword was almost a sign. I've had that since college. I've carted the same self-doubt, self-consciousness, and self-sabotage for quite some time now. The plastic sword falling to pieces was disappointing but honestly who is threatened by a gray plastic sword? Nobody. It mirrored my commitment to my dreams: plastic, non-threatening, and fragile.

I've wanted to get a new sword for a long time. To the point where I've annoyed JoDee on several occasions where we've gone places and I've spied them from across the store. (The metaphor is strong with this one.) But "real" swords are expensive, and the best that I could hope for is accidentally cutting either myself or someone else. So I've had a latex wood-core sword on my wishlist for a while on the online-retailer site. I figured at some point I'd pick that up, but the time was never right.

I was on the online-retailer thinking about picking up a little plastic dumpster fire figure. If there's any metaphor for the past few years a dumpster fire is pretty apropos. But as I got to thinking I realized that the dumpster fire figure was me being more of a victim; of having things happen to me. Wouldn't I rather think in terms of something more proactive? Something that suggests I'm taking care of business and, dare I say it, actually moving my life in a direction that I want to be moving?

(Of course the good-and-proper answer is "You don't need any of these. You're a grown adult who doesn't need to find meaning in toys. What about that whole minimalism thing you've been banging on about?" to which I say "You're absolutely correct on all counts. We can debate the merits of this while I swing around my latex sword like a mock-badass.")

This sword isn't going to intimidate anyone. If you hit someone with it you'd best hope you spent some points in your run ability because it's the equivalent of whacking someone with a foam-covered wooden dowel - it won't draw blood but it won't make you friends either. But Don Quixote didn't need a real sword to slay his dragons - he just had to believe that there were dragons out there that he could slay. And the metaphor is that I'm ready to slay my own metaphorical dragons. I'm tired of thinking how ridiculous my dreams are, and making plastic commitments to them. I'm here to slay those dragons once and for all.

"For truth! For beauty! For art! Charge!"

← Too aggressive
Respite, then back to the chemo mines→