Since I've been culling my video game collection I've noticed that I've been focusing more on the consoles and computers that I have. This has brought my attention full-on to the Atari 2600, a console that I've had a rather complicated relationship with. The 2600 was the console that got me into game collecting, in part because it was mostly cheap and because every one of the folks I was hanging out with collected for the Atari 2600. And the Atari 2600 has a collection of great games. The downside is that the 2600 has a lot of games that are barely games at all. I was more of an Atari Home Computer fan.

(It also doesn't help that the 2600 is the thing that everyone remembers and that nobody seems to remember the Home Computers. Sibling rivalry is real.)

The Atari 2600 has a reputation for being a complex console to program. There's several books that describe how to program the Atari 2600, including the excellent Making Games for the Atari 2600. That's been on my bookshelf for a bit. So for whatever reason I decided this weekend I'd get reacquainted with the 2600.

I first started playing with games under MAME, but I graduated to playing with Stella. Stella is a fantastic emulator for the Atari 2600. Seriously, this thing makes me jealous that the same debugger isn't available for the Atari 800. 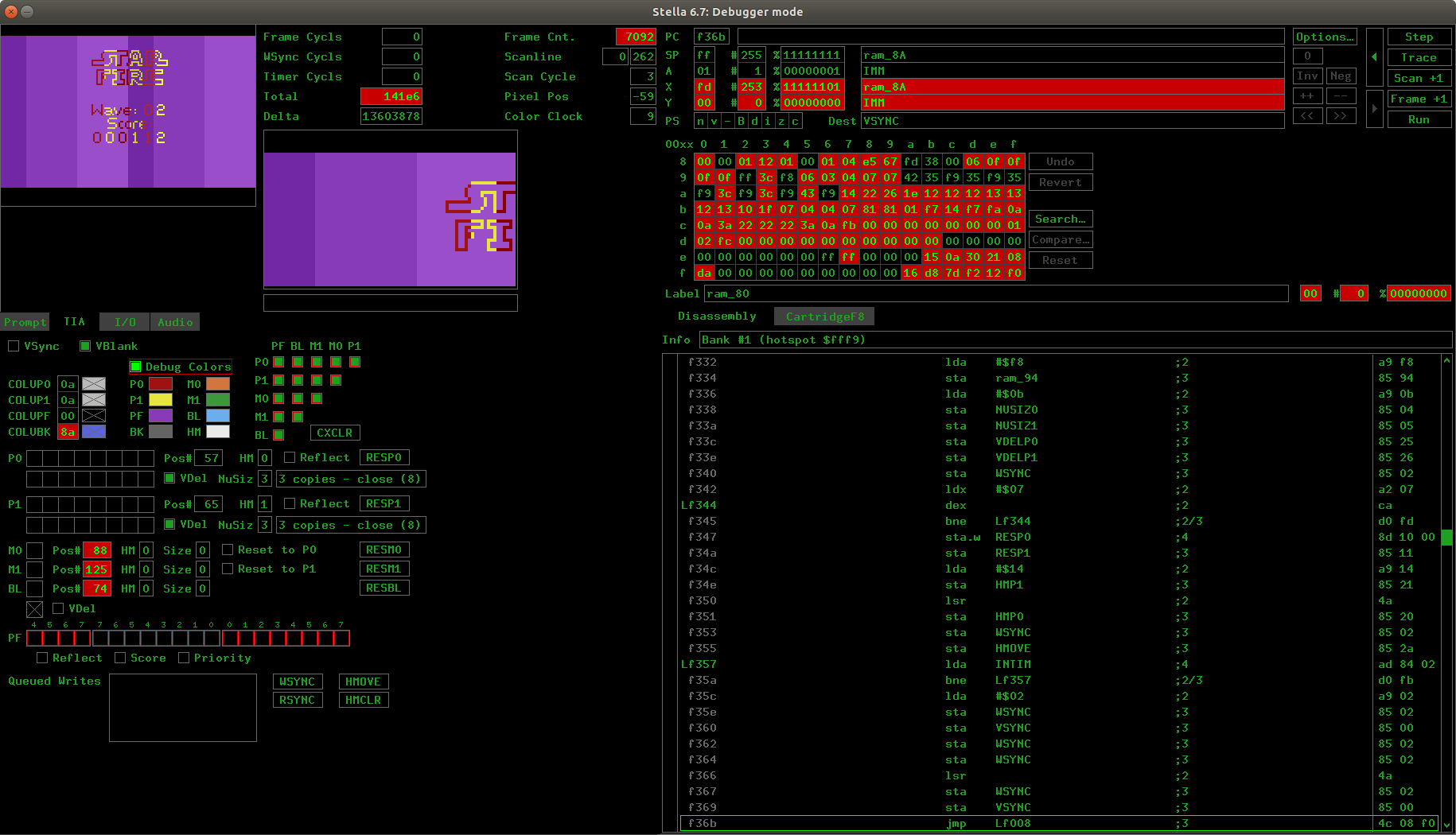 One of the cool things about Stella is that you can show where the players / missiles / ball are for the Atari 2600. There's color coding for it. 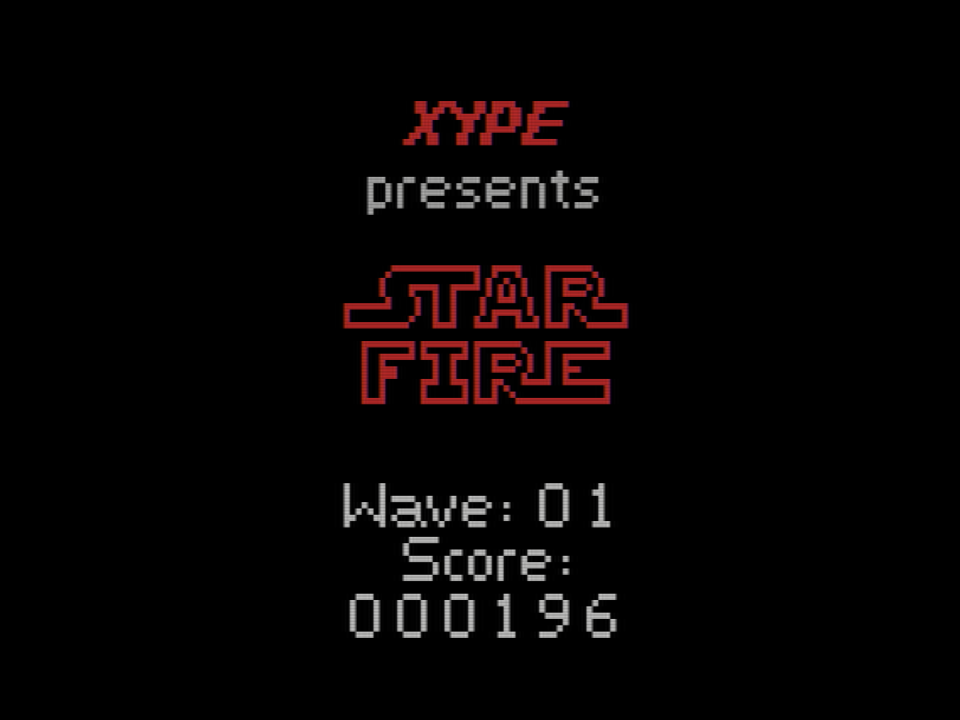 You can also determine where the playfield is, and which playfield is present. The ball is blue, the different playfields are alternating purple. 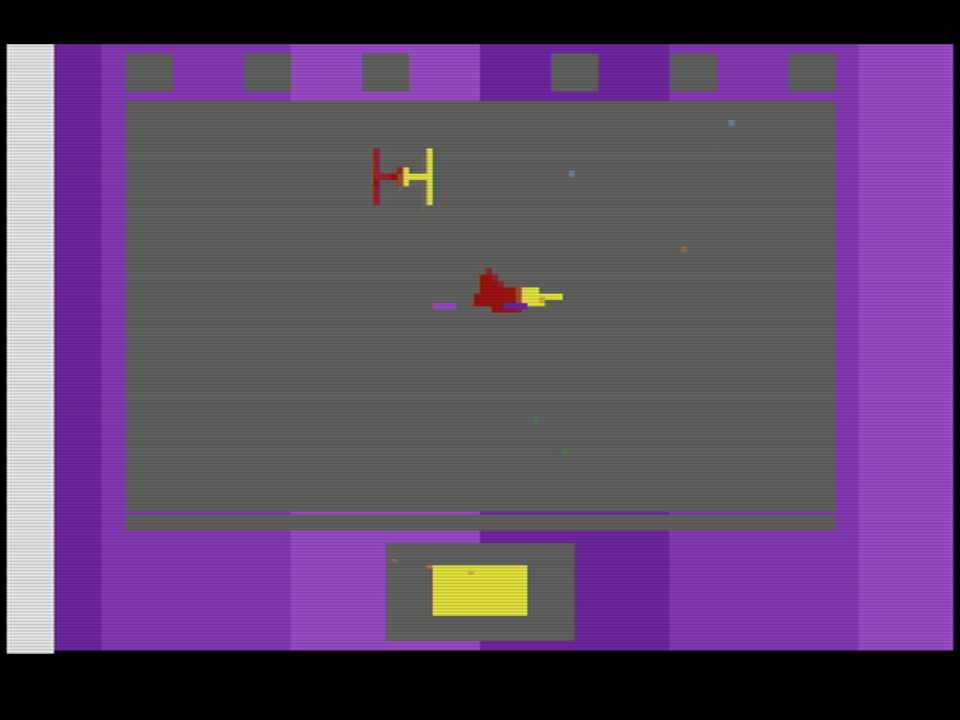 What's even more impressive is the homebrew scene for the Atari 2600. When I was collecting in the 2000s there was some excitement about new releases for the Atari 2600. Unfortunately after a while it felt less special and more like a way to make special limited releases (which were not something I cared about). I'm happy to say that the folks at [AtariAge[(https://atariage.com/store/index.php?l=product_list&c=21) are doing their level best to keep carts for the 2600 in print (along with the 7800, 5200, Home Computers, and the Jaguar, among other machines). And, wow, the things that folks are doing with the Atari 2600 are absolutely mind-blowing. The initial specifications for the Atari 2600 were to do ball-and-paddle games and tank games. Folks like Activision and Imagic (former Atari Programmers) pushed the boundaries of those specifications. 20+ years of homebrew development have shattered those specifications. Folks are making games for the Atari 2600 that put later consoles to shame.

Oh, and did I mention that folks have not only disassembled the source of many Atari 2600 games but also painstakingly commented said disassemblies? That's not all; folks who create new games have also published their source code. There's a reason I chose Star Fire: the code is available here for your perusal.

What this has taught me is that by removing a lot of the cruft of thinking about other machines it's honed me in on enjoying the ones that I have. I've found renewed joy in the Atari 2600, as well as my Home Computer collection. I'm finding out new things about these machines and understanding them at a level that I only dreamed of when I was a kid. Giving yourself permission to let things go that no longer bring you joy can be liberating. I had no idea that the machines that I had; the ones that didn't seem like they were taking up that much space, were taking up quite so much psychic space. Now I'm thinking about what other things I can cull to make more room for the things I enjoy. Who knows what I'll uncover then.

I keep learning more and more about the Atari 2600 each day, and each day my mind is blown by how such a primitive instrument can bring about such amazing games. It truly is a testament to the folks who not only designed the machine but also programmed, documented, and marketed this amazing machine. Few consoles have enraptured me like the Atari 2600, to the point where I want to develop for this machine and see what I'm capable of. I doubt I can make the same level of art that Champ Games has achieved, but even something simple will seem like an achievement. And who knows: maybe I'll be showing off my latest creation in a cartridge shell too.

← State of the pudding-brain
Designing a Well Lived Life: Checking In (November 2022)→